Insights and commentary regarding legal developments in Poland

Poland has been facing an undermining of the rule of law, a compromising of the independence of the judiciary, and risks to guarantees of civil liberties on a scale not seen since 1989. The speed, breadth, and mode of the changes we have witnessed have astounded many both in Poland and abroad. But the response of civil society has also been remarkable – and shows no signs of abating.

The Osiatyński Archive was established in 2017 in memory of the late Professor Wiktor Osiatyński, constitutionalist and human rights defender, in order to fulfill his idea of creating a “chronicle of unlawfulness.” Professor Osiatyński encouraged people to “monitor, record, and report about the behavior of those in power when they breach and disrespect the law and the Constitution,” and to provide reliable information about the nature and consequences of such actions to the public (read the biography of Wiktor Osiatyński below).

The Osiatyński Archive Council has gathered top Polish lawyers, including former judges of the Constitutional Tribunal and the Tribunal of State, legal scholars, judges, attorneys, and civil society activists (see the full list below).

The Osiatyński Archive is built upon:

The Archive itself – a growing collection of documents, draft laws, analyses, and opinions;

Debates – a platform for expert analysis and commentary;

RuleOfLaw.pl – an English-language resource on developments concerning rule of law in Poland;

The Alphabet of Dissent (Alfabet Buntu) – a project showcasing individuals and civil society initiatives in Poland after 2015.

The Wiktor Osiatyński Archive was established in 2017 in memory of the late Professor Wiktor Osiatyński, prominent constitutionalist and human rights defender, in order to bring his idea of creating a ‘chronicle of unlawfulness’ to life, and document what is frequently described as the backsliding of the rule of law in Poland.

Professor Osiatyński encouraged citizens to ‘monitor, record and report about the behavior of those in power when they breach and disrespect the law and the Constitution’, and to provide reliable information about the nature and consequences of such actions to the public.

Since December 2017 we have been monitoring, analysing, and explaining threats to the rule of law in Poland, notably far-reaching changes in the justice system and separation of powers.

We also cover disputes between the European Union and Poland’s government over rule of law issues, and document attacks on judicial independence, including the intimidation of judges and prosecutors. The Wiktor Osiatński Archive is also a platform for substantive discussions about genuine improvements to the justice system and how to guarantee adherence to the rule of law principle in Poland for the future.

As of April 2019, we have published more than 800 articles, authored by more than 120 experts, and archived more than 500 documents, all of which are easily accessible on our website.

Since March 2019, we have also brought information in English to public opinion around the world about the situation in Poland via the Rule of Law in Poland website.

In 2018-2019, we have published profiles of more than 250 individuals and initiatives active in Poland in ‘The Alphabet of Dissent’ [‘Alfabet Buntu’], seeking to acknowledge their work and promote civil society activism.

Our mission is to sustain public interest in the rule of law and to raise awareness within Polish society about the importance and benefits of respecting rule of law standards. To this end, we have organized debates and lectures in Warsaw featuring renowned lawyers and scholars from Poland and around the world, all open to the general public.

Help us to continue this important project inspired by Professor Wiktor Osiatyński.

Donate and share information about The Wiktor Osiatyński Archive.

Thank you for your support!

How to donate to The Wiktor Osiatyński Archive

and Piotr Pacewicz – the President of the Foundation of Civic Monitoring OKO and the Editor-in-Chief of OKO.press

Prof. Andrzej Bator – philosopher of law in the Faculty of Law, Administration and Economics at Wroclaw University.

Prof. Piotr Bogdanowicz – assistant professor in the Law and Administration Faculty of the University of Warsaw, European law expert.

Jacek Dubois – attorney, Deputy Head of the State Tribunal (2012-2015), Chairperson of the Bronislaw Geremek Foundation and the Zbigniew Holda Association.

Maria Ejchart-Dubois – coordinator of Committee in Defense of Judiciary (Komitet Obrony Sprawiedliwości KOS), a lawyer associated with the Polish branch of the Helsinki Committee for Human Rights, Chairperson of the Zbigniew Holda Association, member of the Social Council at the Office of the Commissioner for Human Rights and the Experts Committee on Crime Prevention Programme.

Dr. Aleksandra Gliszczyńska-Grabias – expert on the legal means of combatting xenophobia and anti-Semitism, assistant professor at the Human Rights Center of the Institute of Law Studies of the Polish Academy of Sciences, principal investigator in the European Commission’s “Memory Laws in European and Comparative Perspectives MELA” consortium, Council of Europe expert and Community of Democracies’ Academic Board member.

Dr. Barbara Grabowska-Moroz, LLM – research fellow at the Democracy Institute, Central European University. From 2018 to 2021 she was a postdoc researcher in the RECONNECT project (the University of Groningen, the Netherlands). Prior to that, she worked as a lawyer and project coordinator at the Helsinki Foundation for Human Rights (Warsaw, Poland), and as a legal expert in FRANET (multidisciplinary research network of the EU Fundamental Rights Agency).

Sylwia Gregorczyk-Abram – attorney, members of Free Courts initiative (Wolne Sądy), “2016 Pro Bono Lawyer of the Year” in the daily Rzeczpospolita’s ranking, board member of the Foundation for the Right to Legal Assistance and the Zbigniew Holda Association, founder of “Constitution Week,” a nationwide initiative of lawyers who give lessons about the Polish Constitution in primary and secondary schools.

Prof. Maciej Gutowski – professor in the Faculty of Law and Administration at the Adam Mickiewicz University in Poznań, attorney, Head of the Regional Bar Chamber in Poznań, Co-Chair of the Supreme Bar Council’s Legislative Committee, expert in civil law and civil procedure.

Prof. Robert Grzeszczak – professor in the Faculty of Law and Administration at the University of Warsaw, expert on European Union law, public international law, and constitutional law, member of the Legal Science Committee at the Polish Academy of Sciences (2015-2018).

Prof. Ireneusz Kamiński – professor in the Faculty of International Public Law at the Polish Academy of Sciences, ad hoc judge of the European Court of Human Rights (2014-2016), an expert in international law and human rights.

Prof. Zdzisław Kędzia – professor in the Faculty of Law and Administration at the Adam Mickiewicz University in Poznan, Head of the European Inter-University Centre for Human Rights and Democratization EUIEC in Venice. Chairperson of the UN Committee on Economic, Social and Cultural Rights (2013-16 and 2017-2020).

Wojciech Kozłowski – legal counsel, head of litigation practice at one of Poland’s largest international law firms, an expert on civil and commercial litigation.

Prof. Krystian Markiewicz – judge, professor at the University of Silesia in Katowice, Head of the Polish Judges Association “Iustitia”, an expert in civil law and civil procedure.

Prof. Marcin Matczak – philosopher of law, professor at the Faculty of Law and Administration at the University of Warsaw, associated also with the Centre for Socio-Legal Studies at the University of Oxford, legal counsel, admitted to the Regional Chamber of Legal Advisers in Warsaw.

Justyna Metelska – human rights attorney with experience in representing clients at the European Court of Human Rights, previously trained at the ECHR Office, an expert on the Council of Europe, and Head of the Human Rights Committee at the Supreme Bar Council.

Mikołaj Pietrzak – criminal and human rights attorney, Head of the Regional Bar Association in Warsaw, listed member of the Office of Public Counsel for Defence at the International Criminal Court in The Hague, Edward J. Wende Award winner in 2014, co-founder and board member of the Zbigniew Holda Association.

Dr. Adam Ploszka – attorney, Max Weber Fellow at the European University Institute, formerly an assistant professor in the Faculty of Law and Administration at the University of Warsaw, human rights lawyer associated with the Helsinki Committee for Human Rights and a private law firm, member of the Expert Committee on Countering Homelessness created by the Human Rights Commissioner’s Office.

Prof. Monika Płatek – criminal law and criminology professor in the Faculty of Law and Administration at the University of Warsaw, Open Society Foundation and Council of Europe expert, founder of the Association for Legal Education, board member of the “Panoptykon” Foundation, feminist, politician, recipient of the Order of Polonia Restituta (2012).

Prof. Ryszard Piotrowski – constitutional law expert, professor in the Faculty of Law and Administration at the University of Warsaw.

Danuta Przywara – a former chairperson and co-founder of the Polish branch of the Helsinki Foundation for Human Rights, sociologist, and activist, awarded the Order of Polonia Restituta (2011), the Bene Merito Award (2011), and the Jerzy Zimowski Award (2013).

*Krzysztof Śmiszek, Ph.D. – Member of Parliament since 2019, a lawyer associated with the University of Warsaw Human Rights Institute, human rights and minority rights activist, co-founder of the Anti-Discrimination Law Association

Prof. Maciej Taborowski – attorney, Dr. Hab., Professor at the Institute of Legal Sciences of the Polish Academy of Sciences, Deputy Commissioner for Human Rights (2019-2022), member of the Team of Legal Experts of the Stefan Batory Foundation, The Good Lobby Profs, and the Zbigniew Hołda Association.

Tomasz Wardyński – attorney, arbiter, an expert in arbitrage, an expert in civil, commercial, and competition law, awarded the Order of the British Empire (2001).

Prof. Roman Wieruszewski – Head of the Human Rights Center at the Institute of Law Studies of the Polish Academy of Sciences, member of the Scientific Committee of the European Agency of Fundamental Rights (FRA) in Vienna, UN Human Rights Committee member (1998-2000, 2003-2006), member of the UN Council of Refugees (1999-2014).

Prof. Mirosław Wyrzykowski – Head of the Legal Sciences Committee at the Polish Academy of Sciences (2011-2015), Constitutional Tribunal judge (2001-2010), former dean of the Faculty of Law and Administration at the University of Warsaw.

Prof. Jerzy Zajadło – philosopher of law, professor in the Faculty of Law and Administration at the University of Gdansk.

Prof. Eleonora Zielińska – criminal law professor in the Faculty of Law and Administration at the University of Warsaw, member of the Tribunal of State (2004-2005), government plenipotentiary on gender equality (2014-2015). 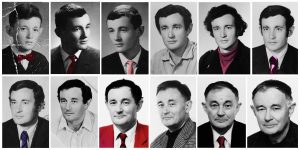 Wiktor Osiatyński (1945-2017) was best known for being a constitutionalist and human rights defender. Professor Osiatyński was also a writer, social activist and feminist, an alcoholism-combatting, recovering alcoholic and one of the authors of the 1997 Polish Constitution.

His writings were based in solid logic. His radio shows were full of passion and cordiality. He was an outstanding educator, and a loved one at that. He helped raise generations of lawyers and human rights activists.

In the 1990s, Wiktor Osiatyński ran the Research Center on Constitutionalism in Eastern Europe based in Chicago. He served as an advisor to the Polish Senate and National Assembly’s constitutional committees in 1997 while working on the new Polish Constitution, for which he was awarded the Officer’s Cross of the Order of Polonia Restituta. In 2011, he was awarded again, this time with the Commander’s Cross for „outstanding service in shaping the democratic rule of law and acting towards strengthening civil society.” He was also awarded the Pawel Wlodkowic 2016 Award, the Barbara Skarga Award For Brave Thinking in 2016, as well as the 2011 Jerzy Zimowski Award.

He worked with the Helsinki Committee for Human Rights where he initiated the creation of its Precedented Cases Program. He was also a board member of the Bronislaw Geremek Foundation. As a staunch feminist, he helped create the Women’s Party, and as recovering alcoholic, he initiated the creation of the Alcoholism Education Commission at the Batory Foundation. Professor Osiatyński published a few dozen books that covered political philosophy, constitutionalism, human rights, history, and the political doctrines of the USA.